the challenge to change

the challenge to change 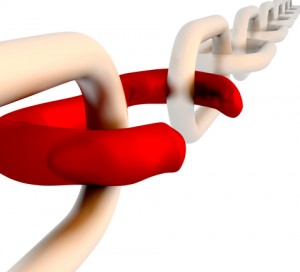 That’s the effect, so what is the cause?  Publication after publication provide in-depth and scientific reasons ranging from what’s missing in a 10-step success strategy through to conclusions from short questionnaires.  My reflections have suggested cause is linked to most corporate experiences I hear of – disconnection.

Corporate changes that don’t reach desired goals demonstrate evidence of disconnection on many levels, between:

A leader stands tall in his beliefs and even taller in his actions, when all that is done is from a place of service, to both self and others equally.

Change is about a belief in, and commitment to, a ‘state of the future’.  An effective leader sees the future from within, walks a talk that reinforces the future and feels the energy and excitement within. This life force drives internal validation, strengthening resolve in possibility!  The outcome is belief from within – a belief in values and how they serve, and a valuing of the self within!

Leader and the people

Change depends on trust.  When people don’t trust the messenger, they most certainly won’t go looking for the message.  Confusion, inconsistency and lack of clarity does not breed trust.   When a leader says one thing and does another, credibility wanes.   Leadership is a relationship and without that being strong, change will suffer.  Disconnection between the leader and the people results in reduced commitment, waning interest and a downturn in productivity – a sure sign that change is up against the wall.

To eradicate the challenge of change, allow the people (and they will seek to, even without your permission!) to find alignment between their own and your values.   Allow them to be convinced of the authentic ‘you’ – after all that’s what they’ll trust.

The people and the vision for the change

People need to feel a positive emotional connection to any proposed corporate vision.  They want to be connected to it and be a part of it.  In fact many times they will add their touches to strengthen it further, by collaborating and innovating through it.

When they don’t belong to the change, don’t feel welcome ‘on the bus’ and are engaged with a different direction as there’s no understanding in the reason for the change, support will not be forthcoming.

If alignment was discovered between the leader and people, this step should easily follow, as they’ll likely imagine a similar future.

The vision and the environment

When an environment will be positively impacted by a change that serves, people will want it, the community will supports it and the enablers will make it happen. Things will simply fall into place and a following will emerge.  Paid marketing campaigns will be redundant and a corporate tool of the past – the environment will simply sell itself!

When a cause of resistance to change is identified through reflection, we can positively impact the effect.  By reconnecting and re-aligning leaders, team members, visions and environments, resistance to change should be nothing but a distant memory.  Could this be the difference between a leader ‘by title’ and an evolved leader?

Debbie Nicol, Managing Director of Dubai-based ‘business en motion’, and creator and author of the ‘embers of the world’ series, is passionate about change.  She works with both traditional and contemporary toolkits that move businesses and executive leaders ahead, whilst working on leader and organizational development, strategic change and corporate cultures.