how to be vulnerable in the changing corporate world

The ‘embers’ model facilitates what the changing world is rewarding – authenticity, trust, vulnerability, internal validation and intuition. By doing so, it is weaving a vast, interconnected body of support for the way ahead. How is your business demonstrating evidence of being a part of the changing future?

What is vulnerability in the context of business?

Vulnerability is the art of exposing elements that would otherwise remain closed or hidden, thereby increasing the chance of risk and uncertainty.

In business, this could mean spotlighting ability levels, opinions, action taken or even unknown practices.  One may be described as vulnerable if the result of an action allows space for others to hold a stronger opinion, which may have negative impact upon our own situation. For example, one may be vulnerable to job loss, demotion, exposure of malpractice, judgement of ability, board decision or industry rating.

Can vulnerability bring positive aspects? It is often perceived as a weakness in business.

Why do leaders choose not to expose vulnerability in business (and life)?

Vulnerability allows the unknown to be known, and hence once ‘out in the open’, an opportunity arises for others to control, influence and judge our situation. When that influence is positive, it would be accepted. When not, it becomes a struggle of absolutes (right vs wrong) with energy being channelled into evidence of viewpoint rather than real results.   A wise choice to not be vulnerable would be when you recognise the essential pillars are absent. For example, trustworthiness of those around you is essential to ensure an objective discussion to emerge.

When is vulnerability a wise tool or state to adopt in business?

Vulnerability  can yield positive results in an environment that welcomes it with respect, that prioritises the importance of people and wishes to move into the unknown rather than stagnate in a known market.  It will generally be one that is not risk-averse, as facing (safe and ethical) risk is to be vulnerable in itself.  It will be an embedded element of an innovative workplace, one that sees advantage in recreating, repositioning, reinventing for a world that is not defined, or possibly a world that is defined in the eyes of those other than ourselves.

I see such great benefit in being vulnerable as it’s a family and personal value. Yet I’m not willing to be so in our workplace.

Willingness depends on two things: an awareness of the need, in this case to be vulnerable, and secondly an awareness of the consequences of not being vulnerable.  From the above statement, both the need and the consequences are clear.  However, the above statement is also showing a connection to and appreciation of the space around you – an extremely important characteristic of effective leadership, as nothing can or should work in isolation in business.  Vulnerability can unintentionally attract less-evolved others to enter a space of control, resulting in exploitation of the reason for being vulnerable.

If you would like an ‘embers’ facilitator to take you and your team through the process we have several workshop levels to choose from. Contact us for a consultation and ‘readiness’ evaluation.

Skills for 21st century leadership include reflection and connection, collaboration and innovation leading us to ‘become’ and evolve beyond current barriers. However achieving that in isolation of what will serve the corporate future may be futile. The evolved section of the corporate world’s leadership sees benefit in vulnerability, as it breeds and beckons the human side of any corporation, thereby cultivating reality and responsibility, and rejects the notion of following through entitlement. 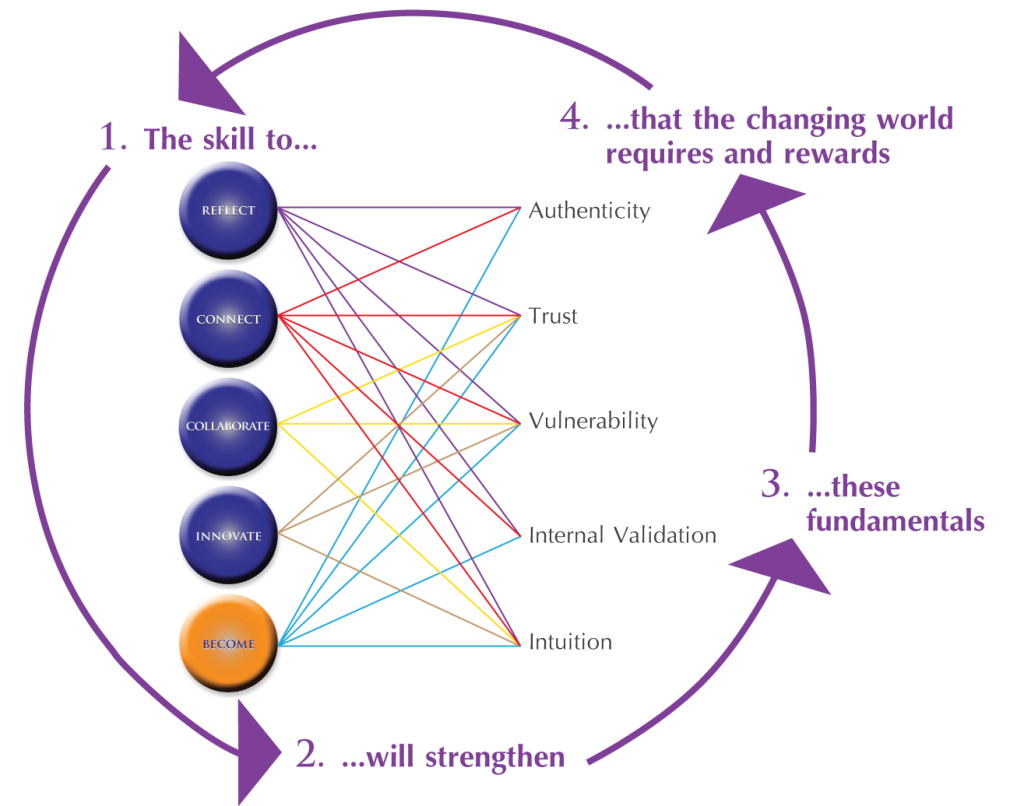 One example of business with credible evidence that is impacting positively whilst creating the future includes:

Let us know when you see or hear of more great examples!